Why 2020 Is the Perfect Time to Revisit IRC

Why 2020 Is the Perfect Time to Revisit IRC

Why 2020 Is the Perfect Time to Revisit IRC? You don’t hear much about Internet Relay Chat (IRC) these days because social media and Slack have stolen some of its thunder. However, it’s far from dead! In fact, 2020 might be the best time to join (or rejoin) the text-based chat revolution.

IRC is a standard Internet protocol that allows people to run their own text-based chat servers with its own selection of channels organized by topic (for example, a channel called #music for talking about music). With no centralized authority over who can host a server, people are free to switch servers at will or even start their own.

IRC started in Finland in 1988 and soon became an international internet sensation. It allowed people from all over the world to share historic news, find romance, or talk about almost any topic with like-minded enthusiasts in real time.

Today, there are still over 2,000 IRC servers and almost 500 IRC networks (groups of affiliated servers) operating worldwide. However, the number of people using them has dropped dramatically (some say 60 percent) from its peak around 2003-05.

Those numbers can be deceptive, though. Peak usage of IRC also coincided with peak use of the network to trade pirated software (“warez”), so not all of those people were using IRC to chat in the first place.

Still, many people have abandoned IRC since the early ’00s due to the rise of the myriad competing online social spaces. Web forums, instant messaging (like AIM), social media, SMS text messaging, collaborative services (like Slack and Discord), and even 3D worlds and games (like Second Life and Minecraft) have all contributed to IRC’s dive in popularity.

Even though IRC’s population is only a fraction of what it used to be, a core group of people who just want basic text chat are still on there chatting to this day.

The Freedom of Classic Internet Chat

In 1993, The New Yorker published a cartoon entitled, “On the Internet, nobody knows you’re a dog.” It became symbolic of the freedom of identity that came with online anonymity at the time.

That anonymity wasn’t perfect, of course. People could (and still can) see your IP address and guess your general geographic location. However, back then, it was unlikely your IP was linked to your real-life personal info in a public way.

Before profile photos and centralized social media became common, you could easily choose an online persona and occupy it with a low risk of public repercussions. Some found this threatening, but it was also very liberating for people in marginalized groups, who could exist online without judgment.

Today, that sense of anonymity, while not entirely extinct, is rarer. For many of us, our on- and offline selves have merged on social networking platforms, like Facebook, Instagram, and Twitter. Often, that profile is also linked to photos of you, as well as your family, friends, and coworkers. All is open for others to see, so we might not feel as free as we’d like to experiment with new ideas.

Luckily, thanks to IRC, you can turn back the clock to 1993 and be a dog online again.

How to Connect to IRC Today 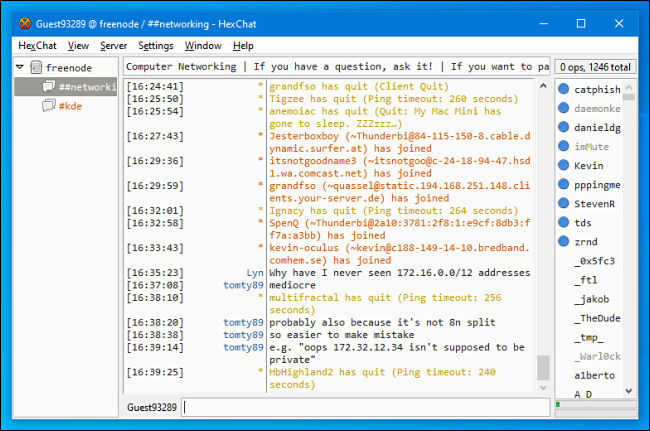 Connecting to IRC today is easier than ever thanks to the client programs available for all major platforms. In most cases, all you have to do is download an IRC client (or install it from an App store), type a name you’d like to use, and you’ll be presented with a list of popular IRC servers.

Below are some popular IRC clients for different platforms:

We don’t recommend you let your kids use IRC. It’s like the Wild West of the web, with plenty of potentially offensive content. You’ll encounter people saying anything you can possibly imagine (and many things you can’t).

However, there are plenty of reasonable people out there, too. You just have to find a server and channel community that fits your personal style. This IRC Channel search tool hosted by netsplit.de is a great way to find like-minded people. It searches across many IRC servers for topics you might want to talk about.

Ultimately, IRC is still a great way to let off some steam, make friends with complete strangers, talk about technical interests, and, potentially, even get some good advice. On IRC, you can make friends for life who will never know what you look like or your real name. In 2020, that’s quite refreshing!

Once you’ve launched your IRC client, pick a server (most clients have a list of them ready to go). Type a nickname, connect, and then select a channel. You can do most of those tasks easily using onscreen menus in the IRC client of your choice.

Once you’re connected, you’ll often see a list of people in the same channel in a sidebar on the right. To chat, click or tap the text bar at the bottom, type your message, and press Enter when you want to send. Simple!

When you use a modern graphical IRC client, you don’t always need to master IRC’s somewhat arcane list of typed commands, but they can still come in handy. Below are a few of the essentials:

Keep in mind when you dive into a popular channel on a popular server, you’re joining an established community that might have been running for decades. Most of the people will likely know each other.

If you want to fit in, step lightly and try not to annoy the locals—but definitely have fun!

How to Search for a Specific Emoji on iPhone

How to Adjust the Volume on Your Mac