How to Fix a Frozen Mac

How to Fix a Frozen Mac

How to Fix a Frozen Mac: Suddenly, your Mac becomes unresponsive. You’ve got the spinning pinwheel of death, or worse, no cursor at all. Nothing you do brings your computer back to life. Here are a few things you can try.

Wait for a Minute or Two

Wait a bit before you rush to power off your Mac or wrestle back control by hammering on the keyboard. Many freezes are caused by a particularly demanding task or problem application. Give your Mac some time to crunch away at the problem before taking any action.

How long you wait depends on how patient you are, but we’d recommend a minute or two. Get up and stretch or make yourself a cup of coffee, and see if your Mac is back when you return. If you know for a fact that a demanding process is causing the slowdown, like a video render, this will give it time to complete.

It might not be as quick as hard-resetting your machine, but it comes with less risk. Once you’ve finally got control of your Mac again, save your work, close any apps you don’t need, and restart your computer.

The other possibility is that you’ll get just enough control back to kill whatever rogue app or process is causing the issue. Let’s take a look at how you can do that.

If your Mac is crawling, but you still have mouse-pointer control, you can try force-quitting (or “killing”) any problem apps that might be causing the slowdown. This could be a web browser with hundreds of open tabs, a demanding image editor, like Photoshop, a game or other software that uses 3D graphics, or a large spreadsheet or word document.

To kill apps quickly, press Command+Option+Esc to bring up the macOS “Force Quit Applications” dialog. In this window, you’ll see any running applications. You can highlight them with a click, and then kill them by clicking “Force Quit.” 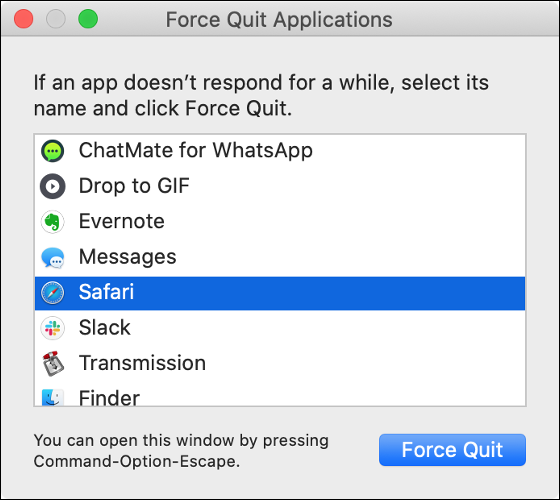 Any unresponsive apps will be listed as such, and these should be killed, as they’re likely to require a restart to function normally. Kill as many apps as you need to until your system feels stable again. Be aware that you might lose any unsaved data.

Related :   You Can Use a Samsung Galaxy Watch with Any Phone

If you have cursor control, you can also right-click (or Control+Click) an app icon in the dock, press and hold Option, and then click “Force Quit” to kill an app.

RELATED: How to Open the Terminal on a Mac

Force Your Mac to Shut Down

If you’ve been patient and forced any problem apps to quit with no success, it might be time to admit defeat and shut down your Mac by force. You can do this by pressing and holding your Mac’s power button until it switches off.

The power button is fairly obvious on most models. If your MacBook has a Touch ID sensor instead of a power button, press and hold the Touch ID button at the top right of the keyboard (see the image below).

On desktop models, like the iMac, Mac mini, and Mac Pro, press and hold the power button on the computer.

You’ll lose any unsaved data in open apps when you do this. While it’s unlikely this will cause any damage, there’s a reason Apple recommends you shut down via the Apple menu. To minimize the chances of anything going wrong, only do this when you have no other choice.

Even if things do go wrong, you can rest easy knowing you’ve backed up your Mac with Time Machine.

Is Your Mac Freezing During or Shortly After Boot?

If your freezing issue is a regular occurrence, it could be caused by a hardware fault. To rule this out, make sure your Mac is running the latest version of macOS, and that you’ve installed any required firmware updates under System Preferences > Software Updates.

Unplug all external peripherals, including mice, keyboards, USB audio interfaces, storage devices, and webcams, and then test for the issue again. If you appear to have resolved the problem, consider also updating any software related to that peripheral.

Related :   How to Control the Exposure in the iPhone’s Camera App

If the problem is easily replicable, you can try booting your Mac in Safe mode to see if the issue persists. Safe mode starts your Mac with the bare minimum number of drivers required to run the system. It also scans your hard drive for issues at boot, which might help fix the problem. 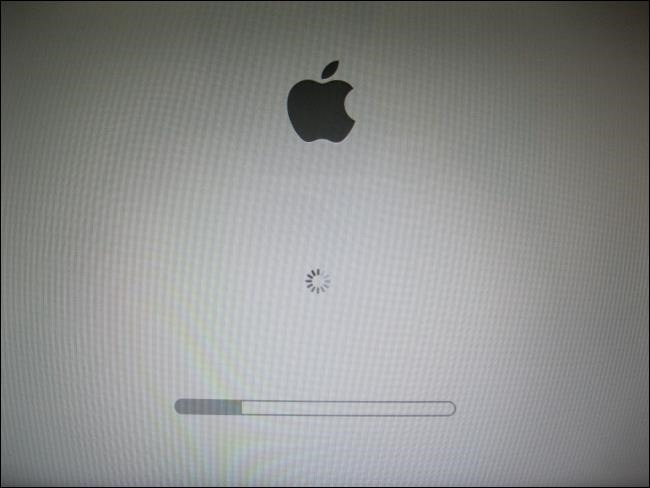 To boot into Safe mode, turn off (or restart) your Mac, and then press Shift as it boots. Release the key when you see the login window and log in. “Safe Boot” should appear at the top right. With your Mac booted in Safe mode, test again for the freezing issue.

If you no longer encounter the issue, try restarting and testing again. It’s possible that by checking your disk for errors, the problem was fixed.

If you still have the problem, make sure any external peripheral devices are unplugged, and then try again. Prune your login items to remove any software that launches at startup and might be causing the issue.

If you still have a freezing issue, it might be time to reinstall macOS from scratch. However, the issue could also be hardware-related.

RELATED: How to Switch Sound Output Devices on a Mac

If the problem is persistent enough that you suspect it’s hardware-related, you can try diagnosing the issue using “Apple Diagnostics” (or “Apple Hardware Test” on machines older than June 2013).

To do this, shut down (or restart) your machine, and then press and hold D while it boots. A gray screen and progress bar should appear that indicates your Mac is being scanned for problems. If Apple Diagnostics won’t run, try restarting and pressing and holding Option+D on startup. This will download the test from the internet, instead.

Unfortunately, Apple Diagnostics can only tell you if there’s a problem. It won’t provide too much information about what the problem is. You should get a vague idea regarding where the fault was detected. However, you won’t get anything more than an error code for an Apple technician to use.

Related :   How to Customize the Apple CarPlay Screen

If you want to delve a little deeper, you can download Memtest86+ to a USB stick. Then, press and hold Option when booting your Mac, and then boot from the USB stick instead. This tests your RAM for errors without launching the operating system. This way, the RAM isn’t partially in use when the test occurs.

If it detects that faulty RAM is the cause, it might be possible to replace it. Unfortunately, the RAM in most modern MacBooks has been soldered to the logic board, which makes repairs difficult, if not impossible.

How to Prevent Freezes in Future

While Mac freezes can be a sign that something isn’t right, they’re more often a sign of a temporary issue that will go away when you restart. There are a few things you can do to reduce the chances of freezes happening again in the future.

The first is to make sure you’re running the latest version of macOS. Apple also issues firmware updates for specific components, which can make a huge difference in terms of system stability. For best results, set your Mac to automatically install updates as they become available.

Not maintaining a decent buffer of free drive space can also cause performance issues and freezes. Apple doesn’t specify how much space macOS needs to “breathe,” but we recommend 10 percent of total drive space. This should also give you a decent buffer to offload files before storing them elsewhere, if necessary.

Sometimes, performance is tied directly to the age of your Mac. Some modern web pages can make old hardware crawl, so it pays to know your machine’s limitations. Avoid heavyweight browsers, like Chrome. Use Safari instead, and think twice about editing videos or playing demanding games.

More Things You Can Try

If your Mac isn’t entirely frozen, you stand a better chance of recovering any unsaved work. Here are some other things you can try to bring an unresponsive Mac back from the brink.

We have some tips for dealing with a frozen PC, as well.

RELATED: How to Opt Out of a macOS Developer or Public Beta