How to Prepare for Halloween in ‘Animal Crossing: New Horizons’

How to Prepare for Halloween in ‘Animal Crossing: New Horizons’

September 2020 in Animal Crossing: New Horizons brought acorns and pine cones falling from trees, waiting to be used for DIY recipes. But now there’s even more content on the way in preparation for the Halloween holiday!

Starting in October 2020, Animal Crossing: New Horizons has a new harvestable item that can be plucked and used in several new pumpkin-themed DIY recipes that are sure to add some chilly touches to your island during the autumnal season.

Pumpkin starts can be purchased in-game from Leif (he will appear randomly outside of the Town Center) or from Nook’s Cranny during the month of October. Once your pumpkins are grown, they can be harvested and put to use in various pumpkin-themed DIY projects that are a part of the “Spooky” collection. 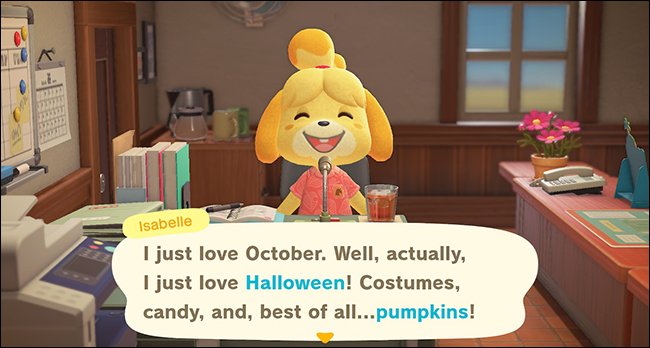 Isabelle will inform you of the new seasonal event in her morning announcement. She will allude to how you can participate in the new festivities—growing pumpkins, buying candy, and more. The event is only available in the month of October 2020.

Where to Buy Pumpkin Starters

Pumpkin starters will be available for a limited time throughout the month of October 2020 from Timmy and Tommy’s Nook & Cranny shop (check the cabinets by the fishing poles) for 280 Bells, or five for 1,400 Bells. 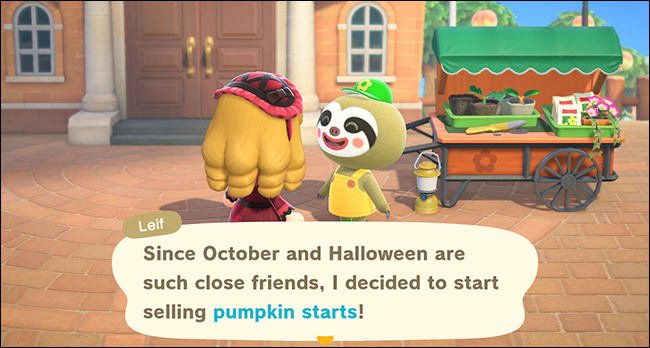 You can also purchase them at Leif’s cart when he appears on your island. One pumpkin start costs 140 Bells, while a bundle of five costs 700 Bells. They’re a lot cheaper if you purchase them from Leif, so if you’re planning on stocking up, be sure to wait for his cart to show up outside of the Resident Services Center.

If you’ve grown an excess of pumpkins that you no longer need, you can sell them in bulk to Timmy and Tommy for a decent amount of Bells (10 orange pumpkins sell for 3,500 Bells), but price varies upon color. You can also give pumpkins away as gifts to family and friends.

Once you’ve gathered pumpkin starts, you can begin planting pumpkins around your island. Equip your shovel and dig into the ground. Then, as you’re facing the hole, open your inventory and select the pumpkin starts to plant them into the ground. Once you’ve planted the pumpkin, you can dig them back up and move them if you desire, just like any other harvestable plant in Animal Crossing: New Horizons.

If you water the pumpkins every day, you could potentially harvest multiples all at once, so be sure to water your pumpkins as they’re growing. After planting, pumpkins take four days to fully mature and will grow into four different potential colors.

And just like flowers, pumpkins will also regrow after you’ve harvested them. Once collected, they will begin at stage two (with four leaves), with a new pumpkin produced two days later. Orange pumpkins appear to be the dominant color, and the other colors are somewhat rare in comparison. 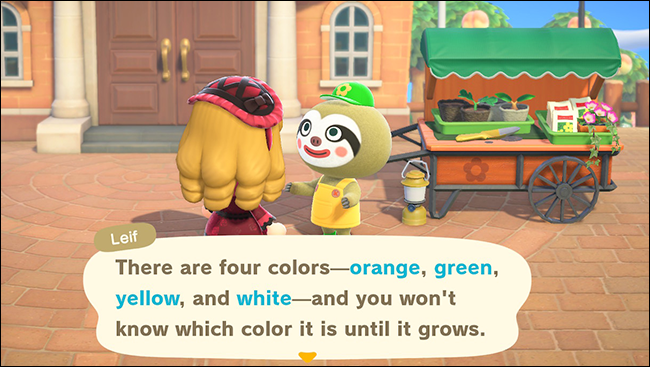 The four different pumpkins color variations that can be produced are orange, green, yellow, or white—and you won’t know the color of the pumpkin until they’ve finished growing on the fourth day.

To harvest the pumpkins and place them in your inventory, stand beside them and press the “A” button on your right Joy-Con controller.

Colors are pre-determined, so you don’t have to worry about crossbreeding. Just water the pumpkins, harvest them when their colors appear, and repeat! To produce the pumpkin color you want, you’ll have to buy more pumpkin starts and grow them to maturity.

The fruits of your labor will result in new Halloween-themed DIY recipes: the Spooky collection! This time around, obtaining recipes isn’t as simple as shooting them from balloons or harvesting the pumpkins you grow. Instead, the new DIY recipes can only be obtained by visiting residents in their homes and talking to them while they’re working on DIY recipes at their workbench. 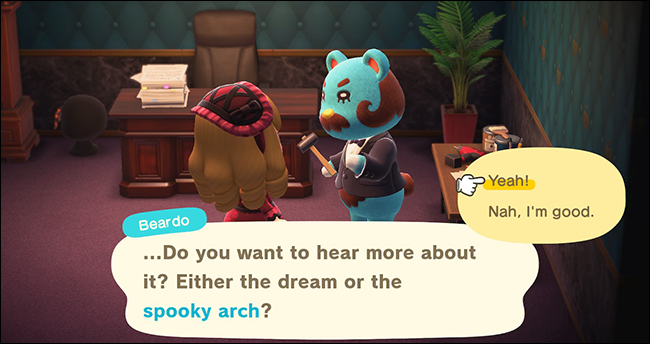 If you want something more unique—dare I say, designer—try using a different colored pumpkin when crafting your new pumpkin-themed DIY recipes. The final color of the item you craft will match the color of the pumpkin you used.

Orange pumpkins are the most common pumpkin color by far, but you can craft different colored-pumpkin DIYs at your workbench, so long as you have enough pumpkins of the desired color. 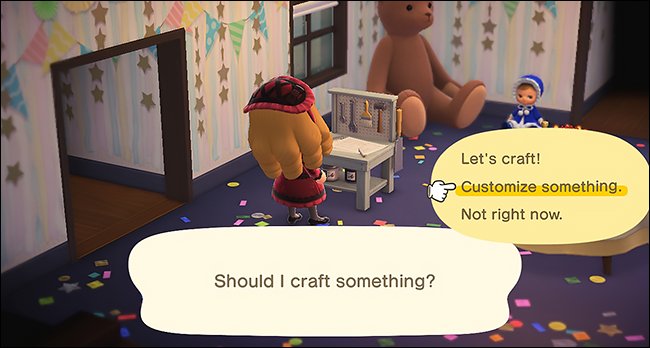 Stand next to your workbench, press “A” on your right Joy-Con controller, choose “Customize Something,” and then select the Spooky item that you want to customize. A new screen will appear where you can choose from the various pumpkin colors—orange, yellow, green, or white. 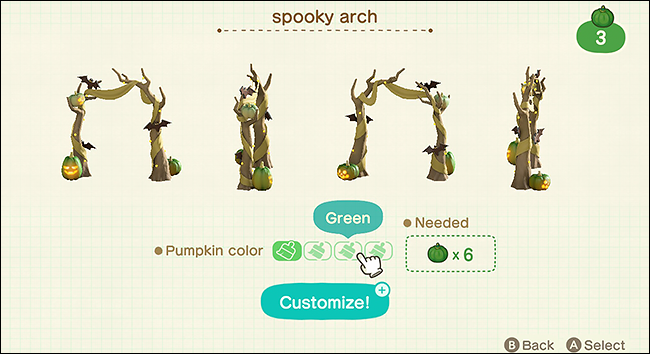 The number of colored pumpkins needed to customize the item is displayed in the top-right of the customization page.

Remember there is no secret method to growing the various unique pumpkin colors, so you’ll have to grow a bunch of them until you get the color you want. 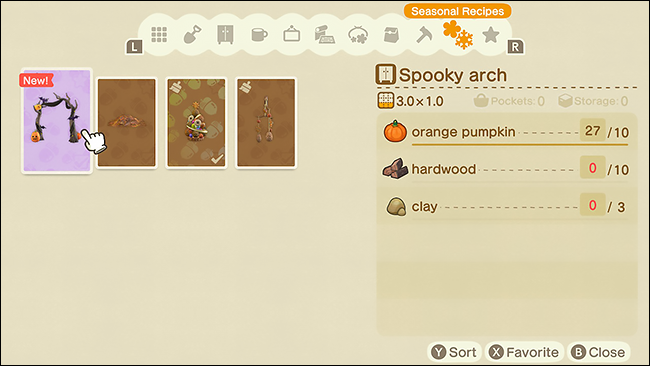 Once you’ve discovered one of the new Spooky DIY recipes, you can view them under the “Seasonal Recipes” category in your Nook Phone’s DIY Recipes app. DIY recipes that you have in excess can also be sold to Timmy and Tommy at Nook’s Cranny or given to friends.

In addition to new DIY recipes, on October 31, 2020, Jack–a specter known as the “Czar of Halloween”—will make an appearance. Jack is familiar to longtime Animal Crossing fans after his appearances in past games, and he is sure to host a special event just for Halloween. 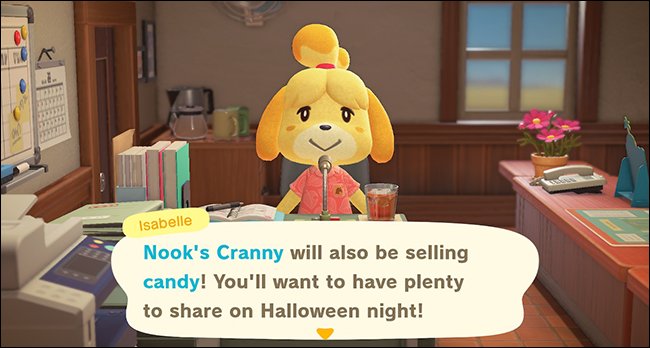 In addition to bringing in the Halloween spirit with jack-o-lanterns, you should also stock up on candy before the big event starts on October 31, 2020. Head over to Nook’s Cranny to pick up candy that you can pass out to trick-or-treaters on Halloween night. 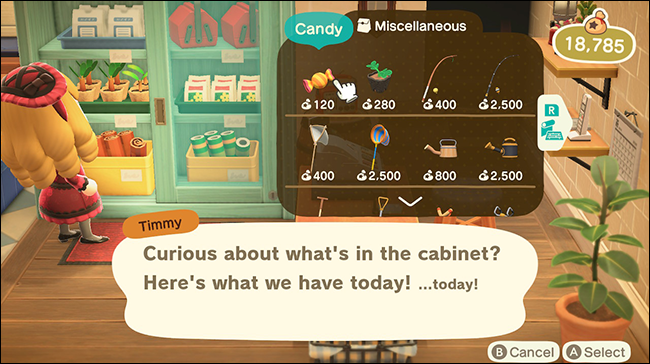 Candy costs 120 Bells and is a limited purchase. There is a once per day and one per customer limit, so be sure to head over to Nook’s Cranny as often as you can throughout the month of October. You won’t want to show up Halloween night empty-handed! 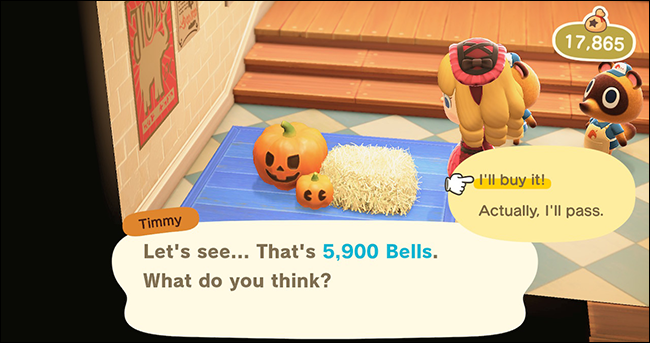 There are also numerous Spooky-themed items on display at Nook’s Cranny throughout the month of October, so if you want to decorate your island with Halloween décor, be sure to check back daily.

RELATED: How to Use Amiibo Cards in ‘Animal Crossing: New Horizons’