Why Are Some Mac App Icons Crossed Out?

Why Are Some Mac App Icons Crossed Out?

If you’re seeing application icons on your Mac with a crossed-out symbol on top of them, it means that macOS can’t run the application. While there could be several causes, the most likely is that you recently upgraded macOS, and it no longer supports 32-bit applications. Here’s why—and what you can do about it.

First: The Other Reasons an App Won’t Run

Fundamentally, a crossed-out application icon means that something is preventing macOS from running the application. There could be several reasons for this, including that the app package is damaged or invalid, the app was written for a different architecture (say, a PowerPC app on an Intel Mac), or the app is untrusted and hasn’t been given permission to run yet.

In those cases, your best bet is to make sure you’re running the latest version of the app (check the developer’s website for updates), and you might want to try reinstalling the app from a clean source if it was damaged. But these are generally rare cases.

Starting with macOS 10.15 Catalina (released October 2019), macOS no longer supports running 32-bit apps. If you have a 32-bit application on your Mac in Catalina or later, you will see a crossed-out symbol over its icon in Finder, Launchpad, and the Dock. 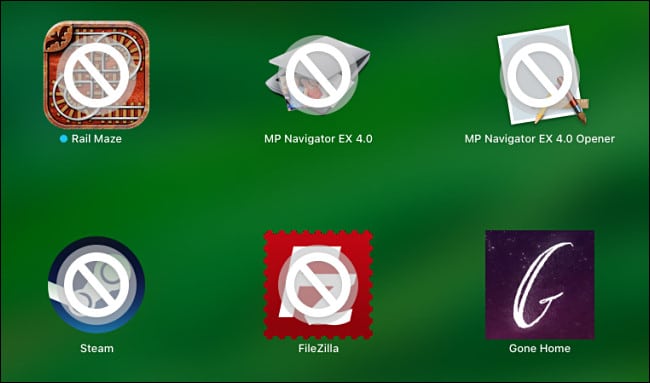 If you try to run one of these crossed-out apps, you will see a message warning you that it needs to be updated.

But why? And what does “32-bit application” mean anyway?

It’s difficult summarize the meaning of the terms “32-bit app” or “64-bit app” without writing a technical research paper, but if you boil it down, both terms refer to how much memory (RAM) and computing power an application can use. A 64-bit application can utilize dramatically more memory (allowing bigger files to load) and theoretically perform much more complex tasks than a 32-bit application.

Related :   Why Does Unplugging a Device Fix So Many Problems?

Because Macs have supported 64-bit applications for over a decade, Apple considers 32-bit applications to be legacy software that should be upgraded to fully take advantage of the latest computing hardware. In Catalina, Apple decided to force the issue by disallowing 32-bit software completely.

Will I Ever Be Able to Use My Crossed-Out Mac Apps Again?

Because Apple wants to push technology forward, it’s unlikely that you’ll ever be able to run 32-bit Mac software natively on new versions of macOS again. So, if you’re faced with crossed-out apps, here are some strategies to deal with it.

Related :   How to See What Data Google Has on You (and Delete It)

Still, It’s Best to Update or Move On

Just as we have already said goodbye to 16-bit applications long ago, ultimately, time marches on and leaves certain technologies behind. It’s actually a good thing, because newer apps can take advantage of more powerful computers and better development techniques. Also, you should continually update your software whenever possible for security reasons. Good luck!