OLED Screen Burn-In: How Worried Should You Be?

OLED Screen Burn-In: How Worried Should You Be?

OLED displays are beautiful to look at and expensive, but you might be surprised to learn they can suffer from “burn-in” or permanent image retention. How prevalent is this issue, and should you worry about it?

What Is OLED Burn-in?

OLED stands for Organic Light Emitting Diode. Because the materials used in the construction of these panels are organic, they degrade over time. OLED is a self-emissive technology, which means no backlight is required. Each pixel generates its own light, which will gradually dim over the course of a product’s lifespan.

OLED burn-in (or permanent image retention) refers to this gradual degradation of pixels. Burn-in isn’t unique to OLED displays—CRTs, LCDs, and plasmas are all susceptible to some degree.

The permanent image retention on OLED displays is caused by the uneven degradation of the pixels of which the display is comprised. It occurs when a particular set of pixels degrade at a different rate than those around them.

Static images or graphics on a screen majorly contribute to this issue. This includes logos displayed in the corner while watching some TV channels, rolling news banners, or the area in which the scoreboard appears when watching sports.

But, just to be clear, watching five hours of sports on a Sunday isn’t going to give your OLED screen burn-in. However, the cumulative effect of watching the same sports channel over an extended period of time might.

The same is true for anything that leaves static elements on-screen for a long time. The HUD of a video game, the Windows taskbar, the arrivals board at an airport, and so on, could all be culprits.

If you’re concerned about burn-in, you might want to avoid buying an OLED display. However, if you simply can’t resist (and who would blame you?), there are a few precautions you can take to avoid this issue.

The first thing you can do is vary your watching habits. This will enable the pixels to wear down more evenly, so you never overwork one area of the screen. Of course, this makes OLED displays unsuitable for some people.

For example, if you leave your TV on a rolling news channel all day, OLED is a bad choice. The same is true if you want to use one as a computer monitor that displays static icons and taskbars all day. If you play the same video game obsessively every day, OLED is also a bad choice.

Related :   How to Add Alternative Text to an Object in Google Sheets

Conversely, if you watch a range of TV channels or play a variety of video games, an OLED display will be fine. Likewise, if you don’t leave static images on your computer monitor for prolonged periods, an OLED will also be fine.

To some people, the idea that you would have to “nurse” your TV to avoid developing permanent image retention sounds like a raw deal. The higher price of OLEDs compared to LCD panels doesn’t help, either.

For others, though, the inky blacks and (theoretically) infinite contrast ratio make the babysitting worth it.

There are lots of other factors that go into deciding whether you should buy an OLED or a traditional LED-lit TV. For example, an OLED panel won’t get anywhere near as bright as the brightest LED sets. However, due to the “perfect” blacks, they don’t necessarily need to.

Plus, even if you do watch a lot of the same content, there’s no guarantee you’ll have to deal with permanent image retention. Even if the pixels do wear down unevenly, you might not notice it during regular viewing.

Test patterns and solid color blocks are useful for spotting OLED burn-in, but they aren’t necessarily representative of normal usage.

LG Display is the only company manufacturing OLED panels. If you see a Sony or Panasonic TV using an OLED panel, it was still made by LG Display. Over the years, the company has refined the manufacturing process to make more resilient screens at lower prices.

Older OLED displays used separate, colored pixels. However, manufacturers soon realized that different colored subpixels aged at different rates, particularly blue and red. LG Display decided to use a grid of white LEDs, which age at the same rate. Colored filters are then used to create the four separate subpixels of red, green, blue, and white.

There are also some software-based solutions to the problem, although these are up to each TV manufacturer, rather than the panel manufacturer. On its TVs, LG limits the brightness in particular areas of the screen that display static pixels, like logos or the HUD in video games.

Related :   How to Delete Multiple Contacts at Once on iPhone 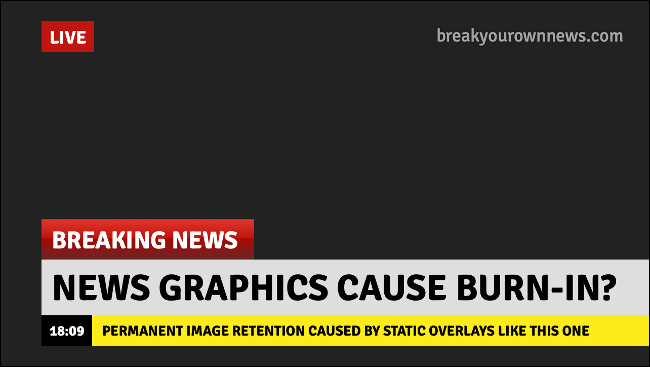 Then, there’s pixel-shifting, which moves the image slightly to share the load of a static image and avoid overworking certain pixels. There are also “pixel refresher” routines that run every few thousand hours or so. These measure the voltage of each pixel and attempt to wear down any areas that haven’t been used as much. The TV then increases the overall brightness of the screen to compensate.

Every manufacturer that uses OLED panels has its own bag of tricks, although, they’re largely the same tactics with different brand-specific names.

In 2013, LG Electronics claimed the expected life of an OLED display was 36,000 hours. In 2016, though, the company increased this to 100,000 hours, or 30 years of watching 10 hours of TV a day. In contrast, LCD panels with LED backlights have a life expectancy of six to 10 years, according to one study.

In January 2018, RTINGS started conducting real-world burn-in tests on six LG C7 displays. They used a variety of content to simulate years of use over a short period. They also left the TVs running for 20 hours a day, without varying the content.

You can see the results of their tests after a year in the video above. At the time this video was produced, the TVs had around 9,000 hours on the clock. This would be the equivalent of about five years of use, for five hours per day. Some sets in the video, like the one tuned to CNN, have significant burn-in.

Others, like the one displaying Call of Duty: WWII, show no signs of burn-in, even when using test patterns. RTINGS stated that it doesn’t expect these results to reflect real-world results, because this isn’t how people normally use their TVs.

However, in any circumstances in which TVs are used in this manner, the test reaffirmed that OLED is a poor choice:

“The TVs have now been running for over 9,000 hours (around 5 years at 5 hours every day). Uniformity issues have developed on the TVs displaying Football and FIFA 18, and are starting to develop on the TV displaying Live NBC. Our stance remains the same, we don’t expect most people who watch varied content without static areas to experience burn-in issues with an OLED TV.”

On his YouTube channel, HDTVTest, Vincent Teoh conducted his own test on an LG E8 display (see the video below). While the test was aggressive on usage (the TV was left on for 20 hours per day), it was also fairly representative of how people use their TVs.

Related :   How to Open Apps and Websites from Search on iPhone and iPad

The display showed no signs of permanent image retention after nearly 4,000 hours of usage. While it’s important not to draw too many conclusions from one test, this pattern of usage is far more representative of the way most of us use our TVs.

Why Bother with OLED?

As far as display technology goes, OLED looks great. Many reviewers also state that LG’s latest generation of OLED displays are the best TVs money can buy when it comes to overall image quality. Since OLEDs are self-emissive, they can achieve perfect black levels, which makes an image truly pop.

While LED-lit TVs with full-array local dimming have improved over the last few years, they still use relatively large “dimming zones.” This can create a halo effect when displaying scenes with high contrast. Mini-LED gets closer to OLED by increasing the number of dimming zones. However, it will take new technology, like MicroLED, to truly compete with OLED.

Since OLED displays are expensive, they only find their way into flagship models. When you buy an OLED, you’ll likely get a top-notch image processor, a 120 Hz refresh rate for better motion handling, and HDMI 2.1 for next-generation gaming. You can expect HDR performance to be excellent, even if the display doesn’t get anywhere near the 1,000+ nits of brightness on the best LCDs.

OLED isn’t for everyone, though. Price and static image problems aside, they simply don’t get as bright as their LED-lit counterparts. If you have a particularly bright room, you might want a brighter LED-lit model instead. For a dark room, cinema-like experience, you can’t beat OLED right now.

The burn-in issue isn’t going away entirely. However, it also isn’t as much of an issue as it once was, thanks to improvements in manufacturing and software compensation. If you’re looking for a new TV in 2020, especially to play the latest games when next-gen consoles launch, an OLED might be your best choice.