How 23andMe’s DNA Test Helped Me Unravel a Secret Family

How 23andMe’s DNA Test Helped Me Unravel a Secret Family

Services like Ancestry.com and 23andMe can be like that unmarked vegetable can in the back of your pantry: full of surprises and often not what you were hoping for. Thanks to a recent DNA test, for example, I now know that my dad is not my biological father.

DNA Tests For the Masses

Since before the rise of at-home DNA testing, family tree tracing has long been a popular activity, both for professional genealogists and armchair ancestry enthusiasts at home. Researchers leaned on microfiche machines and public records, sleuthing the old-fashioned way. In the earliest days of the desktop computer, when pundits had trouble envisioning uses for a PC beyond cataloging recipes, genealogy software was there, helping enthusiasts draw trees using manually curated data fed into it. These days, inexpensive DNA tests have transformed the once hit-or-miss world of genealogy. It’s now easier than ever to discover long-hidden family secrets.

I’m far from the first person to discover that my family tree has unexpected roots and branches. There’s the story of Jenelle Rodriguez, who was put up for adoption without her father’s consent. She spent her life believing her dad had died in a car crash until a 23andMe DNA test reunited them. There’s Richard Bodager, who made contact with his sister for the first time at the age of 50 thanks to a DNA test, after spending most of his life fruitlessly trying to learn anything about his biological family.

The stories out there are boundless. But statistics aside, you never expect it to happen to you. Even though I literally grew up joking that I’d been “switched at birth” because I didn’t seem to look much like the rest of my family, the actual revelation was shocking. And uncovering all the details made me feel like a detective in a cheap novel, unraveling a mystery that, in the end, wasn’t nearly as complicated as the author hoped it would seem.

It all started in the fall of 2019 when I told my parents I had just spit into a vial from 23andMe. In a couple of months, I’d have health data as well as some ancestry information. I was particularly keen to get the ancestral info. My mom’s parents were Austrian and Dutch, and she was raised Catholic; my dad’s family history was murky at best, but generically white and Protestant.

A week later, I got a call from my mom. “David,” my mom confided, “you need to know that you are part Jewish.” She told me the story of how her mom—an Austrian Jew—became a Moravian to get married to my grandfather. The family had kept this secret for 80 years for some reason, and presumably, my mom wanted to make sure I wasn’t appalled by this turn of events.

Related :   How to Customize the Summary Tab in the iPhone’s Health App

Like that moment in Apollo 13 when one of the second stage engines shuts down prematurely and Tom Hanks as Jim Lovell remarks, “Looks like we just had our glitch for this mission,” I thought, wow, I just got my revelation—and I haven’t even gotten my results yet. But there is so much to unpack here—the appallingly casual racism, the delicious family history, the offensive assumption I’d somehow be aggrieved by the news—that I could write a whole different article about that one conversation. Let’s acknowledge that my parents come from a different era and regrettably never caught up with modern ethics … and leave it there.

23andMe has a wonderful feature that takes your ancestry information and creates a visual family tree using data from anyone whom:

In other words, it charts a family tree for you using data from other customers who appear related to you.

It’s one thing to see a list of potential first, second, and third cousins. But to take all that information and pepper a tree with those names makes it come alive. It becomes understandable and relatable in a way that a flat list of names could never be. 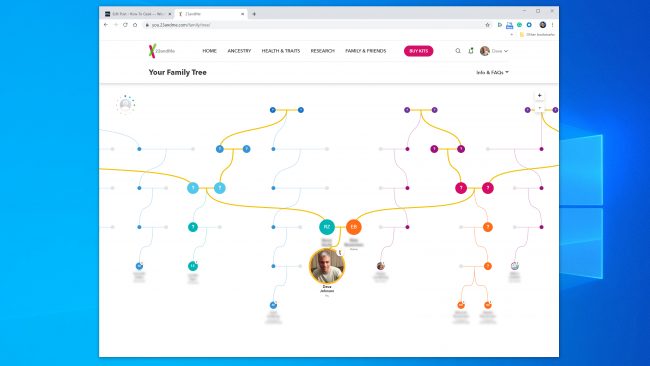 When I got my 23andMe results, one of the first things I did was to look at the tree. I recognized a handful of names on my mom’s side. My dad’s side? Not a single name meant anything to me.

Now, this isn’t as surprising as you might suspect. My dad’s family isn’t tight, and aside from his sister’s family, I’ve never met a one of them. My dad knew very little about his ancestry, but he grew up thinking he was English—like, English as in his grandfather would have known what black pudding actually was. Was that true or just wish-fulfillment by someone who didn’t know anything about his grandparents? Who knows? One year when I was a kid, we made a trip to North Carolina for summer vacation to visit the town where my dad’s family had grown up. But the hall of records had burned to the ground years earlier. We learned nothing, and all I got out of the trip was a wooden model of a shrimp boat.

Is My Dad Protecting a Secret?

Then came holidays 2019. I flew home to spend Christmas with my parents and my sister’s family. I thought my freshly acquired 23andMe results might be a chance to learn more about my dad’s family, but no one, including my dad, knew any of the last names on my dad’s half of the tree.

Here’s something even more intriguing: There was no English in my ancestry whatsoever. I was 25% Ashkenazi Jew—no surprise there, anymore—and another 25% northern European, which accounts for my mom’s dad. But the rest? Mostly Italian. Huh.

I tried to talk my dad into taking a test, but he had no interest in doing so. But he also rejected out of hand the possibility he was Italian. I started to get suspicious. Did he know something? Was he protecting a secret, or just generally distrustful of DNA tests? Either was equally likely; my dad was not what you might call tech-savvy.

I desperately wanted him to take the test so we could see whether or not his name would appear on my 23andMe family tree.

Related: Pro, Air, Mini, or Regular: Which iPad Should You Buy?

Everything Falls into Place

As fate would have it, my dad didn’t need to spit. Unexpectedly, my sister decided to take an Ancestry.com test. To be able to compare apples to apples, I took Ancestry.com as well—my second DNA test in the span of three months. When the results came back, the ancestry makeup was essentially identical between my two tests—a nice confirmation of the accuracy of 23andMe and Ancestry.com. These guys clearly aren’t running a Theranos-style operation.

My sister? She had the same Jewish and Northern European DNA as I did; there’s no question we had the same mom. But her results further showed that she’s 50% English. (My dad was right—he was English!) But she had no Italian genetics. Compare that to me, who is 50% Italian with no English. Yes, it’s possible for there to be variances in how DNA expresses itself in offspring. Each child gets a random half of each pair of chromosomes from both the mom and dad.  But this isn’t that—our DNA was clearly different. We were not full siblings.

The final nail: In the list of relatives, my sister showed up as my closest relative, but she was identified as a “probable half-sister or cousin.” (At some point in the last few months, the Ancestry.com app has changed the way it labels my sister. Perhaps reacting to broad privacy concerns, it now describes her simply as “close family.”)

Related :   How to Safely Use Open Source Code in Your Project

It took me a few days to process all this, and I eventually waited for a moment when I knew my mom would be home alone. I confronted her with the evidence, and she didn’t deny it. After all this, the explanation was disarmingly straightforward: She’d had an affair. My dad never knew and has always believed I was his son.

It has been quite a roller coaster ride. My sister took the news harder than I did. As I see it, people – even moms—sometimes do things they regret, and I was willing to compartmentalize the information. Simply put, this didn’t affect how I felt about either of my parents. But my sister saw things differently, and for a while, I was worried this would end in an ugly confrontation between her and my mom. I’m happy to report that it didn’t occur.

And, as I see it, finding out that you have a new family is actually good news, after a fashion, with exciting new details to uncover. Who was my biological father? What was his life like? Did he have a good life? In what ways am I like him?

I considered myself lucky, as at-home DNA tests have led to grisly discoveries as well. In 2018, police used data from online DNA testing services to finally solve the “Golden State Killer” murders, a decades-old cold case.  Joseph James DeAngelo, a 72-year-old former police officer, was finally arrested for dozens of murders that spanned three decades. And there’s the case of Jessi Still, who used 23andMe to learn about her ancestry, but police used the results (which she had uploaded to a public database) to identify her DNA as a close match to a 40-year-old murder case. Within months, authorities were able to pinpoint and arrest a distant cousin as the murderer.

Thankfully, finding my biological father wasn’t hard; his name and career, which my mom had provided, led me straight to archived articles about him online. Unfortunately, fate hasn’t been kind to that family; my biological father, all his siblings, and all his children are already dead. There’s no one left for me to have a relationship with, even if I had wanted to.

On the other hand, I managed to reach out to a couple of close cousins whom I found through 23andMe and Ancestry.com. They’re lovely people who have helped add some color to the bare sketches I have of the man who gave me half my DNA.